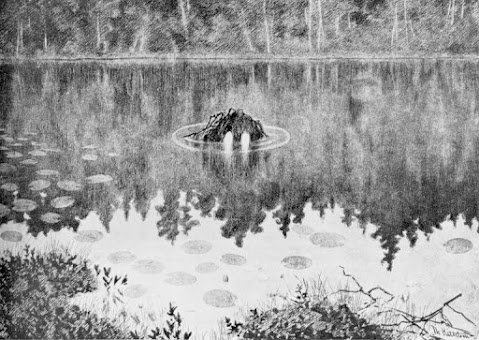 A large bat-like creature that possesses both hair, and an exoskeleton like an arthropod.  It has a lengthy prehensile tail equipped with a glowing protrusion at the end, shaped like a sea anenome with a flashlight inside.  It lures creatures close in order to overpower them and drink the blood.

An amphibious creature with a sail upon its back and duck-like feet.  Its head appears to be a fellow named Steve, who is very pleasant and seems to be in some distress.  The Long-Neck will make every effort to be as amiable as possible, and to ingratiate itself to its prey.

He lures them into deeper swamp.  The long, long neck retracts into fathomless morasses and quickmires, then the creature feeds on the corpses once they have decomposed such as to be masticable. It then dresses its neck in the clothes of its victims, to make a new Steve.

Posted by Dungeon Smash at 5:59 AM