the MOONS of KOS 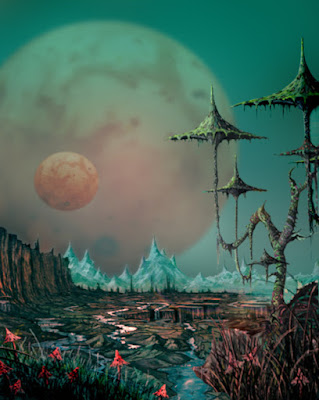 1. the White Huntress
Largest of the moons.  Unwavering and constant, crowding the horizon.  She lightens the seaward prow, bathes the path to treasure in opalescence, guides the axe-maniac and illuminates the cowering victim.  Wolves pray to her.

2. the Red Moon
Goddess of bats, jackals, drunkards, emperors and all who fancy themselves beyond the reckoning of others.  A viscous, inconstant presence, it waxes and diminishes according to its own inscrutable rhythms.  When the Red Moon waxes, the glowline of the Lunar Empire extends to new regions and the Goddess subjugates new peoples.  As it wanes, so do the fortunes of its adherents.
Strangely, the Red Moon has nothing to do with the God Kos.  His color is also red, but the River Kos is unaffected by the tides of the Red Moon.  Perhaps this is why Red Lunar Priests and Kossick Monks despise one another so much.

3. Piku, the Third Blue Eye
Some say this moon is the Eye of the Iron Lord, but if it is, he has kept it a secret.  It sees all that would be hidden.  Its light shines so that smiths and alchemists might work into the night.

4. the Green Moon
The Green Moon is made of cheese.  It is small and follows a crazed orbit which brings it very close to Kos at times.  Wizards have traveled there with magic and returned, as have Dwarfs in their flying-craft.  the Green Moon is inhabited by the Thrisk, a race of bipedal insects.  They are ruled by egg-laying Kyriarchs, who are attended by Princesses.  The Princesses, in turn, are served by bands of loyal Warriors with which they make war upon one another.  Droves of simple Workers serve each Princess, tending her beetle-like livestock.  Sometimes, the Thrisk also travel to Kos by means of magic Moon-portals.  The Princesses have an unearthly beauty, and the Warriors are many times stronger than a normal man.  They produce white-gold swords, of light weight and astonishing sharpness.  the Warriors wield as many as 6 of these scimitars at once.

5. the Black Moon, of Which We Do Not Speak
Posted by Dungeon Smash at 7:20 PM